In May of 1992, during my first week on the job at Maricopa, I was off to Mormon Lake for an “Ocotillo Retreat.” It was a rapid immersion into the world of technology, teaching, and learning at Maricopa. This was also the first of many times I heard about a desire for a collection or database of the different ways faculty were integrating technology into instruction. In a system as large and diverse as Maricopa, no single person can know all of the different ways technology is being used. Yet, most everyone can see the value of having access to this “database of dreams.”

It was this same year that the Ocotillo Support for Technologies Committee published in their Ocotillo report such a compilation:

The committee’s report included more than 140 examples representing disciplines from Accounting to Theater Arts and listing technologies including HyperCard, Toolbook, laserdiscs, “Bitnet,” VAX, multimedia CD-ROM, Electronic Forum, graphing calculators, Derive, bar code readers, and spreadsheets. This report’s summary recommended an electronic database for this information, in many ways a prediction of what we can do now via the web. However, this jumps ahead of the story.

We worked with this Ocotillo committee in 1992-1993 to create a database. The product we created, the Library of Classroom Technology, allowed searches by keywords or a hierarchy of subject categories that could be browsed. Each entry included details on the use of a technology, how long it took to develop or integrate, and optional information on the results of using the technology. (See http://www.mcli.dist.maricopa.edu/proj/libtech/). The first batch of information came from the examples gathered in the previous year’s Ocotillo report. To gather more content, we distributed a large number of paper survey forms.

So to paraphrase the movie Field of Dreams, we thought that “if we build the database… they will come.” While this approach succeeded for Kevin Costner’s character, it did not work out quite so well for our dream database.

Although we designed a short survey form to gather the information, it required time to be completed and returned to us. For the person completing the survey, there was no feedback to see the results. And we did not have a localized system at each college that would strongly encourage people to report the information for the database. So, the database was sparsely populated, and it faded to the fields like a soft dissolve in the movies.

With time we continued to hear this desire for such a database. Because the print form of the information in the 1992 Ocotillo report was popular, we have twice devoted issues of theLabyrinth/Forum/Assidere to themes of “Who’s Doing What” (Spring 1995; Fall 1997). Our method for collecting information was calling for items through electronic mail. Like the 1992 Ocotillo report, the result was more of a sampling, but it did help to share broadly the innovations happening in Maricopa.

Perhaps a technological solution could bring the database alive. In our early development of web resources, we saw that this Internet technology was ideal for our “database” since it was widely accessible, easily updated, and not restricted to specific computer platforms. With some of the same goals of the Ocotillo database in mind, we set up a searchable collection of examples of how the web itself was being used in courses.

Teaching and Learning on the Web (http://www.mcli.dist.maricopa.edu/tl/) allows anyone to search by discipline subjects or by keywords. The site provided the ability to let anyone directly submit new items via a web form, and has grown to include more than 770 examples from around the world.

Though still not a database of Maricopa technology uses, it certainly could be the technical basis for such a system. This past year the leadership team for the learning@maricopa.edu (ACE project: http://www.mcli.dist.maricopa.edu/learning) proposed a new concept for a web database of examples of innovative learning at Maricopa, not restricted to technology. 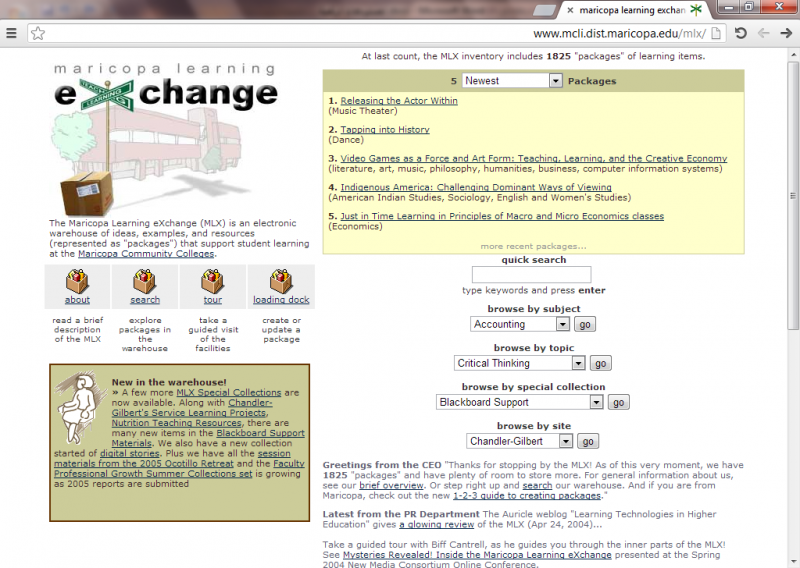 Screenshot of the Maricopa Learning eXchange

This is the root of the Maricopa Learning Exchange (MLX, see http://www.mcli.dist.maricopa.edu/mlx/) described in this issue in an article by Karen McNally. We truly hope that the notion of an exchange of information will compel people to use this system to both receive and share information about learning.

So, here we are again- we have built the database but will they come?

In this issue we again provide the sampling of who’s doing what, cultivated from items people have sent to us since January 2000, and many of them sent via a call for ideas formon the Labyrinth/Forum/Assidere web site. Because the concept of the Maricopa Learning Exchange is broader than technology uses, the examples you read here cover a wide range of innovations by your colleagues.

In addition to the short items listed under “Who’s Doing What,” we also have a few short articles. Jesse Chanley (MCC) writes on how counselors and career staff are using technology to provide students resources for career exploration. From the Maricopa Skills Center, Barbara Lacy shares how “low-tech” skills such as bicycle repair are important ones the students build on as they move into high-tech skills in the machine industry trades. Also, Melinda Rudibaugh (CGCC) describes a new approach to teaching College Algebra Concepts (MAT 150) where students are actively engaged in problem-solving and collaboration on projects that include calculator-based labs. Finally, our correspondent from Cairo, Jon Lea Fimbres, enlightens us on the way the Internet has provided the “invisible lines of connection” between her former Maricopa colleagues and her.

As you read through the samples of “Who’s Doing What” in this issue of the Labyrinth, think about being able to access an up-to-the-minute record rather than this printed snapshot in time. Consider the usefulness of searching by disciplines or specific technologies and then being able to download examples of templates, lesson ideas, multimedia presentations, and applications in use by your colleagues! What if you could even see follow-up information that describes the impact or result of this technology on student learning?

Now, that would be somethingmuch more than a dream. This is the concept of the MLX, and it is being built. So, we urge you to visit the MLX site and make it an active Maricopa resource.

lab·y·rinth \’lab-u-rin(t)th\ n [ME laborintus, fr. L labyrinthus, fr. Gk labyrinthos] (14c) 1 a. : a place constructed of or full of intricate passageways and blind alleys b. : a mysterious passageway for exploring and discovering the unknown c. : a unicursal figure where it is impossible to get lost 2 : an enigma to lead us deeper into the use of new technologies for learning 3 : a publication for exploring and sharing knowledge.

This is a copy/paste of the Spring 2000 issue of the Labyrinth/Forum, a publication of the Maricopa Center for Learning and Instruction (Maricopa Community Colleges), a center I worked at from 1992-2006. It's no longer online, but I have archives posted at http://mcli.cogdogblog.com/labyforum

Writing Down Words for my Tru Friends

I AM A TEACHING HUCKSTER